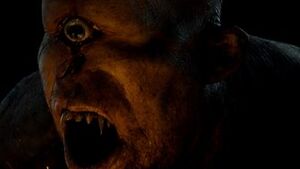 A Cyclops was a creature that only had one eye and often lurked inside dark caves. Generally, they were aggressive towards other forms of life and have a taste for human flesh.

One Cyclops was encountered by Jason, Hercules and Pythagoras lurking inside the cave they had entered in order to escape from Pasiphae and the Colchean army. While trying to escape the tunnels, Hercules succeeded in blinding the lone Cyclops and and then knocking it out before making their exit. (A New Dawn Part 2)

As well as being recognised for their single eye, the Cyclopes were also known for eating men, and thus had pronounced fangs. They had huge and muscular humanoid bodies, greatly dwarfing normal humans. Though they held immense physical power, they could be matched by exceptionally strong humans such as Hercules.

The Cyclops that Hercules faced was almost twice his size. It was nearly hairless and wore only a loincloth, revealing a series of mysterious markings across it's body. While carrying a club as a weapon, it preferred to use it's own brute strength for the hunt. They hunt there prey through mainly a combination of sent and hearing.

Wikipedia has a more detailed and comprehensive article on Cyclops

Various ancient Greek and Roman authors wrote about Cyclopes. Hesiod described them as three brothers who were primordial giants. All the other sources of literature about the Cyclopes describe the Cyclops Polyphemus, who lived upon an island (often identified by ancient authors with Sicily) populated by the creatures.

Retrieved from "https://atlantis.fandom.com/wiki/Cyclops?oldid=10289"
Community content is available under CC-BY-SA unless otherwise noted.