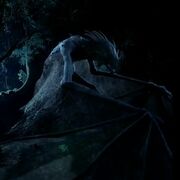 The Harpy was a creature summoned from the pool of the cave owned by Circe. It was summoned to attack Pythagoras in order for Jason to go to see Circe alone. It succeeded in wounding Pythagoras before Jason managed to kill the harpy. This was a part of the witch's plan to kill her sister, Pasiphae. (The Song of the Sirens)

Wikipedia has a more detailed and comprehensive article on Harpy

In Greek mythology and Roman mythology, a harpy (plural harpies, Greek: ἅρπυια, harpyia, pronounced [hárpuja]; Latin: harpȳia) was a female monster in the form of a bird with a human face. They steal food from their victims while they are eating and carry evildoers (especially those who have killed their family) to the Erinyes. They seem originally to have been wind spirits. Their name means "snatchers".

Retrieved from "https://atlantis.fandom.com/wiki/Harpy?oldid=9547"
Community content is available under CC-BY-SA unless otherwise noted.