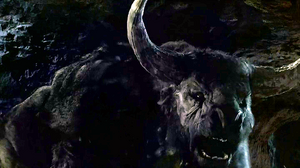 The Minotaur (Greek: ὁ Μῑνώταυρος) was a monstrous creature situated in the Labyrinth that had the head and tail of a bull and a huge muscular humanoid body. (The Earth Bull)

The Minotaur had formerly been a normal man and had been cursed by the god Poseidon to assume the monstrous form and suffer an insatiable hunger for human flesh. Every year, seven tributes were forcibly given in sacrifice to the beast in order to protect the City of Atlantis and its King, Minos. He had been there for over twenty years.

Each year, the Minotaur would be sent a tribute of seven adults from Atlantis. The tributes would be forced into the cave system that made up the Labyrinth to be eaten by the Minotaur.

Pythagoras was selected to be sent to the caves as he picked a black stone, but Jason took his place. Pythagoras and Hercules attempted to help Jason and got captured and sent into the Labyrinth as tributes with him.

It was prophesied that the only person capable of killing the Minotaur was Jason. In a fight between the two, Jason found a sword left in the cave by someone long dead who had unsuccessfully tried to kill the Minotaur. Jason was able to use the sword to stab the beast as it charged him down. As the Minotaur slowly reverted back to his human self, he spoke of the prophecy, and thanked Jason for freeing him before he died. (The Earth Bull)

The Minotaur was obviously an immensely malevolent creature of sheer hunger. It doesn't have any complaints about massacring innocent people and kills without mercy. The Minotaur wasn't wholly intelligent and only seemed to follow it's perpetual sense of starvation. Brutal, bloodthirsty, strong, vicious and powerful, the Minotaur's one flaw was that it didn't take the full measure of it's surroundings and enemies.

Wikipedia has a more detailed and comprehensive article on Minotaur

In Greek mythology, the Minotaur dwelt at the centre of a labyrinth on the Greek island of Crete. Every one, seven or nine years (depending on the source), seven young men and seven maidens from Athens would be sent into the labyrinth as sacrifices. The Minotaur was eventually slain by the Athenian hero Theseus.