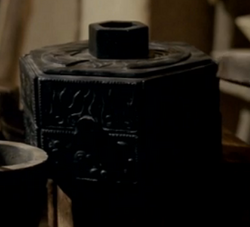 Pandora's Box was a small container, which housed the greatest evil in the world. It was originally created by Pandora, the first woman to live. Because of how dangerous it was, Zeus threw the box into the darkest depths of the underworld. In Tartarus, the box was protected by Campe to stop anyone from stealing it and taking it back to the living world.

Hercules was forced to go in search of the box when Kyros imprisoned his love, Medusa. After returning with the box from Campe's lair, realising it would cause great suffering if opened, they copied the box and left the original in the hidden in underfloor of their residence. Medusa however found the box after being tempted by its call and became cursed as a monster. Jason gave the box to the Oracle, who promised it lolol be put in a place where no human could open it again. (Pandora's Box)

Jason later asked for the box back in order to find a cure using any markings that bared across it. Pythagoras brought it to Daedalus who was a master of the Ancient tongue who believed he would crack the code. The cure was that the one who loved the cursed would have to sacrifice themselves in order for the curse to be lifted. (The Price of Hope)

In series two, Medusa's curse is lifted, but to save Atlantis, she asked Pythagoras to take the box from Melas, who safekeeps it, so she can revive her curse. (The Gorgon's Gaze)

Wikipedia has a more detailed and comprehensive article on Pandora's Box

Pandora's box is an artefact in Greek mythology, taken from the myth of Pandora's creation in Hesiod's Works and Days. The "box" was actually a large jar (πίθος pithos) given to Pandora (Πανδώρα, "all-gifted", "all-giving"), which contained all the evils of the world.

Today the phrase "to open Pandora's box" means to perform an action that may seem small or innocent, but that turns out to have severely detrimental and far-reaching consequences.

Retrieved from "https://atlantis.fandom.com/wiki/Pandora%27s_Box?oldid=10543"
Community content is available under CC-BY-SA unless otherwise noted.